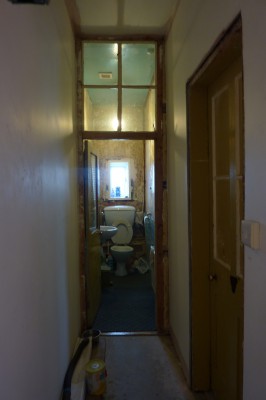 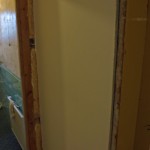 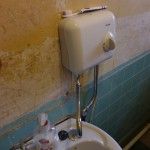 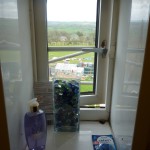 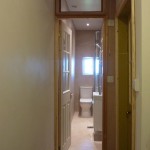 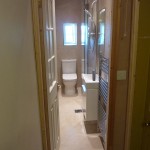 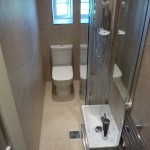 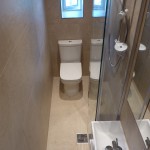 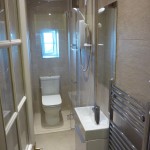 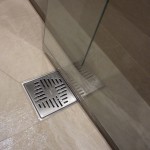 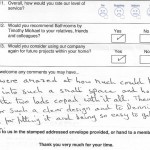 We love a challenge, and this was definitely one! Our customer had a narrow cloakroom within their period stone house. The only hot water was provided by a small water heater over the basin. Our customer wanted to get a shower within the room as well as a basin and toilet. In such a small space there were no off-the-shelf shower enclosures that could achieve this, and still allow access to a basin and toilet – so Tim designed a wetroom.

The room was lengthened by pinching some unnecessary space from the landing. The toilet remains at the back section and basin at the front with the middle section forming the shower wetroom area, bespoke glass screens and hinges were installed that pivot over the shower when not in use. The clever use of this middle section of the room has made the room much more practical. We plumbed the basin tap direct to a hot water heater that we located in the basin unit and added an Electric shower. A fan was installed and a dual fuel towel warmer. We took the room back to the stonework, fully insulated the previously cold room including the floor and ceiling, reinforced the floor and fitted a wet deck to the entire floor. We also installed a new door, door casing and window light above. The room was finished with LED lighting and precision tiling in Filita bone porcelain tiles.

“We were amazed at how much could be fitted into such a small space and how well the two lads coped with it all. Thanks to Tim for such a clever design and to Denis and Adam for fitting it and being so easy to get on with”.
Mr & Mrs Adcock, 2015